BREAKING: House Speaker Nancy Pelosi agreed to let the House of Representatives vote on an important amendment to the PATRIOT Act that will prevent the government from spying on your Internet activities without a warrant. But Adam Schiff (D—CA 28th) is trying to gut the amendment to give law enforcement and intelligence agents access to your VPN usage, what YouTube videos you've been watching, and other sensitive data. Enough is enough.Tell Adam Schiff to stop spying on our Internet activity.

OUR FREEDOM IS AT STAKE

For more than a decade, US law enforcement and intelligence agencies have exploited Section 215 of the PATRIOT Act, collecting billions of phone records on tens of millions of innocent people. Not only did federal courts rule that this kind of mass surveillance was unlawful, but the government's own oversight committee determined that the the program was "not proven useful in identifying unknown terrorists or terrorist plots." Shockingly, Congressional Democrats like Adam Schiff worked with Republicans to simply rewrote the laws to allow this ineffective, abusive surveillance program to continue.

Mercifully, Section 215 of the PATRIOT Act is set to expire next month, bringing this Orwellian nightmare to an end. But Democrats like Adam Schiff and Nancy Pelosi are likely to vote in favor of reauthorization. Again. These same Democrats recently impeached Donald Trump for abusing his power, so why would they trust the president and his corrupt administration with the power to spy on the American public, including people of color, journalists, and human rights groups? It just doesn’t make sense.

Below, you’ll find a list of Democratic Party leaders and lawmakers who serve on important committees of jurisdiction in the House of Representatives. These politicians can control any upcoming votes in the House of Representatives to either extend or sunset Section 215 of the PATRIOT Act. It’s time for these progressive lawmakers to live up to their progressive values. So call them or tweet them and urge them to put an end to Section 215 of the PATRIOT Act.

Nothing less than our freedom is at stake.

TELL THESE DEMOCRATS TO REJECT REAUTHORIZATION OF THE PATRIOT ACT

Chairman of the House Permanent Select Committee on Intellgience 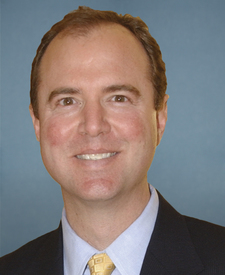 There is absolutely no doubt: President Trump is the worst president in modern history.

So why should the worst president in modern history have the power to conduct mass, unwarranted surveillance on American citizens?